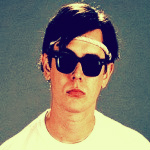 My heart swells with love for nerds...and Colin is the cutest nerd ever.

He looks so cute!

I think I've actually been to that record store before, years and years ago.

Roswell is celebrating it's 10 year anniversary on Fan Forum on October 6th so stop the board and join in on the celebration post your memories or why this show still touches you after 10 years.

Colin Hanks is set to topline "Jack and Dan," Matt Nix's new 13-episode hour long series for Fox.
The straight-to-series project, which also stars Bradley Whitford, is produced by Fox TV Studios under the company's international co-production model.
It centers on Jack (Hanks), an ambitious, by-the-book detective whose habit of undermining himself has resulted in a dead-end position at the Los Angeles Police Department. Worse, he has been partnered with Dan (Whitford), a drunken, lecherous, wild-card cop who hangs onto his job only because of a heroic act years before.
Filming on the show, an action comedy in the tone of Nix's USA Network series "Burn Notice," is slated to begin early next year.
Hanks, who began as a regular on WB Network's sci-fi drama "Roswell," recently did an arc on AMC's "Mad Men." His feature credits include comedy "The House Bunny," "Untraceable" and "The Great Buck Howard."
He is repped by CAA and BenderSpink.
http://celebrifi.com/gossip/Colin-Hanks ... 30541.html
http://thetvaddict.com/2009/11/04/intro ... w-of-2010/
http://lambsilencer.blogspot.com/2009/1 ... k-dan.html
http://www.actualteam.com/?p=12060
http://insidetv.aol.com/2009/11/04/coli ... k-and-dan/
SAVE ROSWELL CAMPAIGN- Roswell General Discussion & News
My Stories:
Pen Pals
Never Let You Go
Our Normal
Reunited
I'm the Man: The Christening of W.Roswell High
~~~~~~~~~~~~~~~~~~~~~~~~~~~~~~~~~~~~~~~~~~~~~
Top

I have to learn to post on Twitter now that my co-mod decided to put us on there, but hey...I guess the upside is that I will read all the Ros cast's posts, too, right?

Thanks for posting all the pics of our man! <3
I want an Alien Blast! <3
Top

here are some stills of the movie HIGH SCHOOL and as we know Colin plays a role in it. As a little reminder, he's mostly stoned in the movie.

*sigh* He's still playing the stoner roles? I loved him in Untraceable. He needs to do more roles like that. Still love seeing his boyish good looks. Thanks chanks_girl!