So I'm not the biggest Emilie fan, but her movie Brick with Joseph Gordon Levitt is freaking awesome. The best movie I've seen all year, I've got to say.


This is from Yahoo Entertainment News:

Lost star Emilie de Ravin has found herself a husband.

The actress tied the knot with her longtime boyfriend Josh Janowicz on June 19 in Melbourne, Australia, her publicist confirmed. The duo had been engaged since Jan. 1, 2005

I was wondering why she was on the cover of a Bridal magazine...I think it was Weddings.

Well, congrats to her then!

Surfgirl02 wrote:I was wondering why she was on the cover of a Bridal magazine...I think it was Weddings.

Well, congrats to her then!

I know I also saw the today, and she did look very pretty in all of her pics. I may not be a Tess fan, but I am an Emilie fan and its good for her, in the magazine it said they met in 2000 so they have been heading toward alter for a long time now, and I also just saw The Hills Have Eyes and I thought she did wonderful in it, and i dont think it was as bad as people have said, but i have yet to see her other movie, brick, i think it is, is it out on dvd? is it any good?

<3 tay
"Okay, I'll be Christina for you. If you'll be Izzie for me."-George
"Deal."- Meredith
(George stops the Elevator abruptly)
"Derick had a woman in his trailer last night. She was ugly.Very Ugly. Except she was tall and beautiful and he was naked.
"McDreamy was doing the McNasty with McHottie. That McBastard!"

I saw the Hills Have Eyes over the weekend, rented the DVD. It was quite gory but I liked Emilie in it.

I read somewhere, cannot recall where that she is engaged, and has been for awhile. If so, I am happy for her too

Hey all Emilie fans, I just read on the news section of the website: http://www.imdb.com, that Emilie has married her longtime boyfriend. I forgot his name, but they both are 24 years old. Congratulations for them

aww our lil roswell gangs all grown up now...

well congrats to her!

People.com has reported that Emilie and her husband Josh have sepreated after 6 months of marriage. 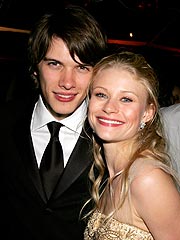 Emilie de Ravin, who plays Claire Littleton on ABC's Lost, has separated from her husband after only six months of marriage, her publicist, Jeff Raymond, tells the Associated Press.

The Australian actress and actor Josh Janowicz, both 25, were married in Melbourne in June of last year.

The wedding was intentionally small, de Ravin told PEOPLE at the time. "I'd never have a large wedding," she said. "That's not the kind of person either of us is. We're both quite low-key people."

It was a first marriage for both. They have no children.

Despite the brevity of the marriage, "We've been together nearly four years," de Ravin told PEOPLE in March 2006. The couple originally met "through friends," de Ravin added, "which is the best way to meet someone, isn't it?"

An Australian native, de Ravin lived in Los Angeles with Janowicz and commuted to her TV show's set in Oahu, Hawaii.

Besides Lost, de Ravin appeared in the horror film The Hills Have Eyes and TV's Roswell. Janowicz has been seen on TV's Cold Case and as the "hot priest" in the movie Charlie's Angels: Full Throttle.