I love that Jason would consider doing a movie or a "Return to Roswell" kind of thing! Oh man..to dream, to envision, to hope...<happy sigh> I love this show.

What? You saw the tatooist?

How? I thought it was only in Sweden and a few other places

hey,
Will It by any possible chance be released in the UK? 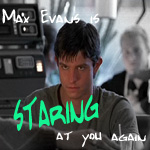 I don't know if it's allowed here or not, but I have the link to a website that is streaming the movie. So PM me if you want it.

I was an extra in this wonderful film last May where it was filmed in NYC!

The cast and crew have worked so hard to make this film a reality! It is great to know it is hitting more film festivals!

More info on tickets and on The Gen Art Film Festival can be found here
http://www.genartfilmfestival.com/2008/

So if you want to see some good films and have a good time go to the film festival Support Independent Film Making!

The 13th annual Gen Art Film Festival will kick off this year's event with the Matthew Broderick starrer "Diminished Capacity."

The comedy, which in February had its North American rights picked up by IFC Entertainment, was directed by Terry Kinney and also stars Alan Alda and Virginia Madsen. It's one of the seven features and seven short films that comprise what's designed to be one of the year's more intimate festivals, where young professional filmmakers take part in screening committees and consumers are encouraged to connect with the filmmakers.

This year, the Acura Grand Jury Award will award a feature film and a short with $10,000 and $5,000, respectively, while the Star Gazer Award will honor breakout talent for excellence in acting. The Film Festival Audience Award will be bestowed in the categories of best feature and best short.
Top

behrluv32 wrote:I want to go really badly but ill be in boston that night i have class moday night and tuesday all day

Awww... Too bad there's not that many people reading this forum. No one replied back to me. =[ Or apparently there's no one near NY. I really want to go, but I hate going alone. GRRRRR> =[ If he's going to be there, I MUST be there.