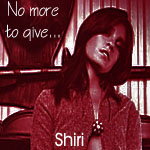 vampiricheart
Enthusiastic Roswellian
Posts: 26
Joined: Fri Aug 02, 2002 10:26 am
Location: Where ever Orlando Bloom and The Depp are. YUM YUM

Okay, so I've always been interested in the character of Khivar and it pissed me off that the PTB never developed him. At all. And then the only episode where they show him, let alone discuss him, he's all about laying Isabel.

But anyway, I'm really interested in the wide range of development that is Khivar. First of all because I've always had a thing for the villian. I love watching fall from grace that a really serious villian has to have. Since it is my opinion that people aren't born messed-up or despondent, experiences and tribulations have a lot to do with it. Just as they do with the hero. The villian is, to me, what happens when a person, faced with the same battles as another, takes an opposite, extreme approach.

Secondly, because I love when the actual character of the villian is explored. He's not just this bad-guy who is evil only to give the good-guy hell, but he's this developed character with views and opinions that could be rational, without the restaints that the hero has.

I'm more interested in Khivar, not as the big, bad, villian of Max and the Royal Four, but as an anti-hero. Everything that Max is not. That is what makes a bad guy, a bad guy; not having that certain purity and disipline as the hero.


So I guess I'm just asking the masses,


Who Is Khivar To You?

To me, Khivar is:
-Ruthless= I see him as someone who is rarely plagued with guilt or remorse. I can easily imagine him furious yet so calculating in his retort or punishment.
-Passionate= My Khivar is all rage, lust, joy and pain. He's ruled by them. While Max and....well all of the Pod Squad live their lives trying to govern their desires and personal wants for fear of what the repercussions might be, Khivar is a ever-wanting, never ceasing, desire. For power, glory, sex, control, you name it, he wants it all. I see him as someone, not cut off from feeling, but someone who feels so deeply that he becomes self-indulgent to satisfy or relieve what emotion overcomes him. Where one is angry, he is furious. Where one is infatuated, he is lustfully obsessed.
-Vengeful= I see Khivar as someone who can who a grudge for a long, long time. I see him as someone so calculating, that he would let himself simmer in hatred to insure a cruel, personal retaliation.
-Controlling= The Khivar that I envision is controlling to the point of sadism. No matter what, he will get what he wants and if he has to cut you down to a stump, he'll tear you out by the roots. I don't see him easily controlled by someone, not even in matters of love. I thought of this with Khivar and Vilandra. Though I'm not sure if he actually loved her(even though he came to Earth one time in the entire series and that was to get Vilandra), but if he did, he wasn't that swayed to not kill her and her family. It was what he wanted and nothing was able to pull him from that goal.

I would love anyone's input on how they see Khivar. I think that one great thing about the PTB slacking off on developing Khivar as a character, is that it offers little to no canon of who he is. He's, in my opinion, more of a blank canvas than anyone else on the show.

For me, Khivar is someone who wanted change, but went about it the Napoleon way. He is someone ruthless, who got interested in Vilandra because of her royal blood line (like Napoleon with his wife, who was Marie-Antoinette's niece), but who ended up falling for her and never getting over her, as him coming to Earth in a human body tended to show.

Michael : From day one, I knew you were the girl for me, I never wanted anyone else.
Top

I agree with everything the two of you have said so far.But I have to also add this in too.

I think Khivar was a silver tounged devil.I think he had the ability to either make a speech or talk one on one to people in a way that would instantly draw anyone to his side.Watch some of those old tapes of Hitler making speechs and how the crowd used to roar.I think Khivar could also do that.

I also think Khivar had a way to see small things and work them to his way.Say someone was a minor palace worker but they have means to important stuff and they were passed up for a promotion due to royal politics.I see Khivar noticing this,he takes him/her to the side,shows them sympathy and would say something like this.

He can draw people to him very easily.
Top

A good discription of Khivar is found at: http://www.roswellfanatics.net/viewtopi ... 33&t=19663 paper has worked very hard to give us this villian.

Of course, life is not fair. You shouldn't expect it to be fair, but you should expect it to be ironic.
JKR 1981-2001
History is made of wars, recovering from wars and preparing for the next war.
JJR 1975-
Top

Hah! Thanks for the plug Ken!

I was just looking for some rules about what to do when you hit 20 pages and I stumbled onto this.

I never set out to write a long story about Khivar. I actually thought I could squeeze out a few chapters and then quit.

But Kavar is the type of guy who takes over. Everything.

And when he's got you, he doesn't let go. (Don't read my story if you like SHORT fics! I think I'm about half-way through.)

But my guy seems to have the worst luck possible. Maybe he's not as good at reading people as he thinks.

Despots tend to be myopic.


I thought of this with Khivar and Vilandra. Though I'm not sure if he actually loved her(even though he came to Earth one time in the entire series and that was to get Vilandra), but if he did, he wasn't that swayed to not kill her and her family. It was what he wanted and nothing was able to pull him from that goal.

My Khivar didn't kill her, even though he was ultimately responsible. (He would dispute that).

And he didn't come to Earth JUST FOR HER athough it SEEMED that way.

But I follow cannon, so he's returned to Antar.
Now he's wondering why his trip wasn't more fun than he thought it would be.

But he's coming back to Earth.

If he can just get the zamn wormhole to work once more.

And then WATCH OUT.